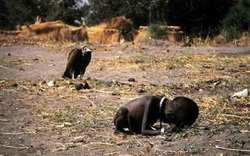 The photo is the “Pulitzer Prize” winning photo taken in 1994 during the Sudan Famine.
The picture depicts stricken child crawling towards an United Nations food camp, located a kilometer away.

The vulture is waiting for the child to die so that it can eat him. This picture shocked the whole world. No one knows what happened to the child, including the photographer Kevin Carter who
left the place as soon as the photograph was taken.
Three months later he committed suicide due to depression. 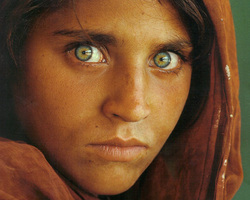 And of course the afghan girl, picture shot by National Geographic photographer Steve McCurry. Sharbat Gula was one of the students in an informal school within the refugee camp; McCurry, rarely given the opportunity to photograph Afghan women, seized the opportunity and captured her image. She was approximately 12 years old at the time. She made it on the cover of National Geographic next year, and her identity was discovered in 1992. 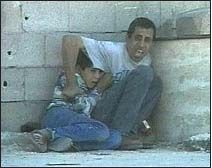 Today we break a little the site’s pattern showing you not a photo but an image captured from a film showing the Palestinian father, Jamil ad-Durra, trying to protect his son from israeli gunfire moments before the boy was shot dead, the father wounded and a Palestinian ambulance driver who came to rescue them, also killed.

Reporters watched helplessly as the boy and his father became trapped against a wall with nothing but a small concrete block for cover as bullets rained around them on a road near the Jewish settlement of Netzarim in the Gaza Strip. Mohammed crouched weeping behind his father, who tried in vain to shield him with his arms and body. At one point, the father raised his head and wagged his finger, as if to scold. Some time later, both were shot and Mohammed slumped into his father’s lap.
Mohammed died, while his father survived badly wounded. An ambulance driver, who braved the fierce shooting to try to rescue them, also killed. 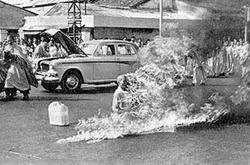 June 11, 1963, Thich Quang Duc, a Buddhist monk from Vietnam, burned himself to death at a busy intersection in downtown Saigon to bring attention to the repressive policies of the Catholic Diem regime that controlled the South Vietnamese government at the time. Buddhist monks asked the regime to lift its ban on flying the traditional Buddhist flag, to grant Buddhism the same rights as Catholicism, to stop detaining Buddhists and to give Buddhist monks and nuns the right to practice and spread their religion. 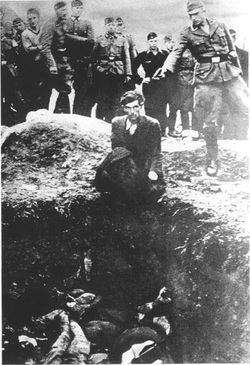 Picture from an Einsatzgruppen soldier’s personal album, labelled on the back as “Last Jew of Vinnitsa, it shows a member of Einsatzgruppe D is just about to shoot a Jewish man kneeling before a filled mass grave in Vinnitsa, Ukraine, in 1941.

All 28,000 Jews from Vinnitsa and its surrounding areas were massacred at the time. 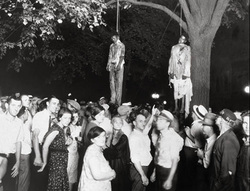 This is a famous picture, taken in 1930, showing tho young black men accused of raping a white girl, hanged by a mob of 10,000 white men. The mob took them by force from the county jailhouse.

Another black man was saved from lynching by the girl’s uncle who said he was innocent. Even if lynching photos were designed to boost white supremacy, the tortured bodies and grotesquely happy crowds ended up revolting many. 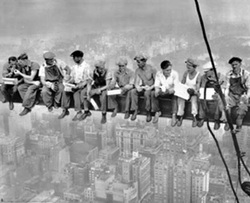 Lunch atop a Skyscraper (New York Construction Workers Lunching on a Crossbeam) is a famous photograph taken by Charles C. Ebbets during construction of the GE Building at Rockefeller Center in 1932.

The photograph depicts 11 men eating lunch, seated on a girder with their feet dangling hundreds of feet above the New York City streets. Ebbets took the photo on September 29, 1932, and it appeared in the New York Herald Tribune in its Sunday photo supplement on October 2. Taken on the 69th floor of the GE Building during the last several months of construction, the photo Resting on a Girder shows the same workers napping on the beam. 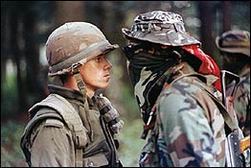 his is probably Canada’s most famous picture. The Oka Crisis was a land dispute between the Mohawk nation and the town of Oka, Quebec which began on March 11 1990, and lasted until September 26 1990. It resulted in three deaths, and would be the first of a number of violent conflicts between Indigenous people and the Canadian Government in the late 20th century.

This is a rare image which was purportedly taken in 1911 offer postcard views of Niagara Falls completely frozen over. It circulated by email from aprox. 2003.

It is said to be fake, however…. The flow of water was stopped completely over both falls on March 29th 1848 due to an ice jam in the upper river for several hours. This is the only known time to have occurred. The Falls did not actually freeze over, but the flow was stopped to the point where people actually walked out and recovered artifacts from the riverbed!