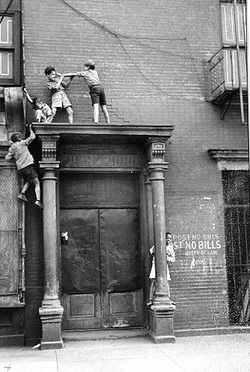 Helen Levitt (August 31, 1913 – March 29, 2009) was an American photographer. She was particularly noted for "street photography" around New York City, and has been called "the most celebrated and least known photographer of her time."
Levitt grew up in Brooklyn. Dropping out of high school, she taught herself photography while working for a commercial photographer. While teaching some classes in art to children in 1937, Levitt became intrigued with the transitory chalk drawings that were part of the New Yorkchildren's street culture of the time. She purchased a Leica camera and began to photograph these works, as well as the children who made them. The resulting photographs were ultimately published in 1987 as In The Street: chalk drawings and messages, New York City 1938–1948.

She associated with Walker Evans in 1938-39. She enjoyed early success. In July 1939, the new photography section of the Museum of Modern Art in New York City included Levitt's work in its inaugural exhibition. In 1943, Nancy Newhall curated her first solo exhibition "Helen Levitt: Photographs of Children" there. Her next major shows were in the 1960s; Amanda Hopkinson suggests that this second wave of recognition was related to the feminist rediscovery of women's creative achievements.

In the late 1940s, Levitt made two documentary films with Janice Loeb and James Agee: In the Street (1948) and The Quiet One (1948). Levitt, along with Loeb and Sidney Meyers, received an Academy Award nomination for the screenplay of The Quiet One. Levitt was active in film making for nearly 25 years; her final film credit is as an editor for John Cohen's documentary The End of an Old Song (1972). Levitt's other film credits include the cinematography on The Savage Eye (1960), which was produced by Ben Maddow, Meyers, and Joseph Strick, and also as an assistant director for Strick and Maddow's film version of Genet's play The Balcony (1963). In her biographical essay, Maria Hambourg writes that Levitt "has all but disinherited this part of her work."

In 1959 and 1960, Levitt received two Guggenheim Foundation grants to take color photographs on the streets of New York, and she returned to still photography. In 1965 she published her first major collection, A Way of Seeing. Much of her work in color from the 1960s was stolen in a 1970 burglary of her East 13th Street apartment. The remaining photos, and others taken in the following years, can be seen in the 2005 book Slide Show: The Color Photographs of Helen Levitt. In 1976, she was a Photography Fellow of the National Endowment for the Arts.