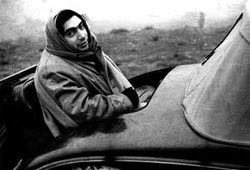 A Hungarian combat photographer and photojournalist who covered five different wars: the Spanish Civil War, the Second Sino-Japanese War, World War II across Europe, the 1948 Arab-Israeli War, and the First Indochina War. He documented the course of World War II in London, North Africa, Italy, the Battle of Normandy on Omaha Beach and the liberation of Paris. His action photographs, such as those taken during the 1944 Normandy invasion, portray the violence of war with unique impact. In 1947, Capa co-founded Magnum Photos with, among others, the French photographer Henri Cartier-Bresson. The organization was the first cooperative agency for worldwide freelance photographers. 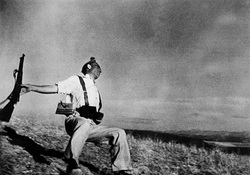 Capa originally wanted to be a writer; however, he found work in photography in Berlin and grew to love the art. In 1933, he moved from Germany to France because of the rise of Nazism, but found it difficult to find work there as a freelance journalist. He adopted the name "Robert Capa" around this time - in fact "cápa" ("shark") was his nickname in school and also he felt that it would be recognizable and American-sounding since it was similar to that of film director Frank Capra. He found it easier to sell his photos under the newly adopted "American" sounding name and over a period of time gradually assumed the persona of Robert Capa (with the help of his current girlfriend Gerda Taro, who acted as a intermediary between himself and those who purchased the photos taken by the "great American photographer, Robert Capa"). Capa's first published photograph was that of Leon Trotsky making a speech in Copenhagen on "The Meaning of the Russian Revolution" in 1932. 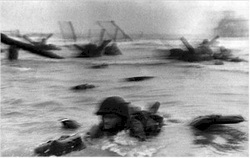 He was born into a Jewish family in Budapest. His parents were tailors. At the age of 18, first he settled down in Vienna, later relocated to Prague and finally in Berlin. He started his studies in journalism at the German Political College but he was not allowed to continue them because he was Jewish. He settled down in Paris, where he adopted the name ’Robert Capa’ in 1934. At that time, he had already been a hobby-photographer.

In 1934 "André Friedman", as he called himself at that time, met Gerda Pohorylle, a German Jewish refugee. The couple lived in Paris where André taught Gerda photography. Together they contrived the name and image of "Robert Capa" as a famous American photographer. Gerda took the name Gerda Taro, becoming successful in her own right. She travelled with Capa to Spain in 1936 with the intention to document the Spanish Civil War. In July 1937 Capa went on a short business trip to Paris while Gerda remained in Madrid. She was killed near Brunete during a battle. Capa, who was reportedly engaged to her, was deeply shocked and never married. 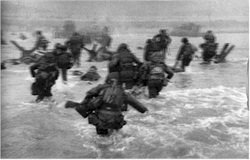 In February 1943 Capa met Elaine Justin, the beautiful young wife of actor John Justin. They immediately fell in love and the relationship lasted until the end of the war, although Capa spent most of his time in the frontline. Capa lovingly called the redheaded Elaine "Pinky," and their romance became the topic of his war memoir, Slightly Out of Focus. In 1945, Elaine broke up with Capa and married her friend, Chuck Romine.

Some months later Capa became the lover of actress Ingrid Bergman, who was travelling in Europe at the time entertaining American soldiers. In December 1945, Capa followed her to Hollywood, where he worked for American International Pictures for a short time. Bergman tried to persuade him to marry her, but Capa didn't want to live in Hollywood. The relationship ended in the summer of 1946 when Capa traveled to Turkey.