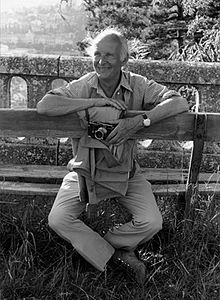 Henri Cartier-Bresson (August 22, 1908 – August 3, 2004) was a French photographer considered to be the father of modern photojournalism. He was an early adopter of 35 mm format, and the master of candid photography. He helped develop the "street photography" or "life reportage" style that has influenced generations of photographers who followed.


Cartier-Bresson was born in Chanteloup-en-Brie, Seine-et-Marne, France, the oldest of five children. His father was a wealthy textile manufacturer, whose Cartier-Bresson thread was a staple of French sewing kits. His mother's family were cotton merchants and landowners from Normandy, where he spent part of his childhood. The Cartier-Bresson family lived in a bourgeois neighborhood in Paris, near the Europe Bridge. They were able to provide him with financial support to develop his interests in photography in a more independent manner than many of his contemporaries. Cartier-Bresson also sketched in his spare time.

As a young boy, Cartier-Bresson owned a Box Brownie, using it for taking holiday snapshots; he later experimented with a 3×4 inch view camera. He was raised in a traditional French bourgeois fashion, required to address his parents using the formal vous rather than the familiar tu. His father assumed that his son would take up the family business, but the youth was strong-willed and upset by this prospect.

He attended École Fénelon, a Catholic school that prepared students to attend Lycée Condorcet. The proctor caught him reading a book by Rimbaud or Mallarmé, and reprimanded him: "Let's have no disorder in your studies!" Cartier-Bresson said, "He used the informal 'tu'-which usually meant you were about to get a good thrashing. But he went on: 'You're going to read in my office.' Well, that wasn't an offer he had to repeat."

Studies painting
After unsuccessfully trying to learn music, as a boy Cartier-Bresson was introduced to oil painting by his uncle Louis, a gifted painter. Uncle Louis' painting lessons were cut short, when he died in World War I.

In 1927, at the age of 19, Cartier-Bresson entered a private art school and the Lhote Academy, the Parisian studio of the Cubist painter and sculptor André Lhote. Lhote's ambition was to integrate the Cubists' approach to reality with classical artistic forms; he wanted to link the French classical tradition of Nicolas Poussin and Jacques-Louis David to Modernism. Cartier-Bresson also studied painting with society portraitist Jacques Émile Blanche. During this period, he read Dostoevsky, Schopenhauer, Rimbaud, Nietzsche, Mallarmé, Freud, Proust, Joyce, Hegel, Engels and Marx. Lhote took his pupils to the Louvre to study classical artists and to Parisian galleries to study contemporary art. Cartier-Bresson's interest in modern art was combined with an admiration for the works of the Renaissance—of masterpieces of Jan van Eyck, Paolo Uccello, Masaccio and Piero della Francesca. Cartier-Bresson often regarded Lhote as his teacher of "photography without a camera."

Experiments with photography
Although Cartier-Bresson gradually began to be restless under Lhote's "rule-laden" approach to art, his rigorous theoretical training would later help him to confront and resolve problems of artistic form and composition in photography. In the 1920s, schools of photographic realism were popping up throughout Europe, but each had a different view on the direction photography should take. The photography revolution had begun: "Crush tradition! Photograph things as they are!" The Surrealist movement (founded in 1924) was a catalyst for this paradigm shift. Cartier-Bresson began socializing with the Surrealists at the Café Cyrano, in the Place Blanche. He met a number of the movement's leading protagonists, and was particularly drawn to the Surrealist movement's linking of the subconscious and the immediate to their work. The historian Peter Galassi explains:

The Surrealists approached photography in the same way that Aragon and Breton...approached the street: with a voracious appetite for the usual and unusual...The Surrealists recognized in plain photographic fact an essential quality that had been excluded from prior theories of photographic realism. They saw that ordinary photographs, especially when uprooted from their practical functions, contain a wealth of unintended, unpredictable meanings.

Cartier-Bresson matured artistically in this stormy cultural and political environment. He was aware of the concepts and theories mentioned, but could not find a way of expressing this imaginatively in his paintings. He was very frustrated with his experiments and subsequently destroyed the majority of his early works.

From 1928 to 1929, Cartier-Bresson attended the University of Cambridge, where he studied English, art and literature, and became bilingual. In 1930, stationed at Le Bourget, near Paris, he completed his mandatory service in the French Army. He remembered, "And I had quite a hard time of it, too, because I was toting Joyce under my arm and a Lebel rifle on my shoulder."